Those few common tasks and puzzles that are so common in our daily lives and yet so unmentioned in conversation. The one that I recently consciously realized was the task of untangling headphones or other wires. It's like a puzzle, and one that I do almost daily. It's such an ordinary part of my life, I don't even really think about it, I just do it.

Email ThisBlogThis!Share to TwitterShare to FacebookShare to Pinterest
Labels: common, everyone, experiences, has, headphones, tangled, unmentioned

Hey everyone, quick post today. I've been running on four hours of sleep and lots of coffee all because I had to write this essay. Tell me what you think of it, it's not a final draft yet, so please, feel free to critique. Or troll. :)


btw, this is written from the perspective of a USAtian college kid.


tl;dr: revolution is good. so are Molotov cocktails.

Though we may be removed from our forefathers in this country by nearly 300 years, the revolutionaries and intellectuals responsible for the founding of our country provide inspiration for anyone living in the United States or even in the world; a shining example of the People triumphing over authority. Time has diluted the messages of these men, but the world we live in provides many modern examples for those willing to look for them. In Greece during the December of 2008 a 15-year old student, Alexandros Grigoropoulos, was shot and killed by two policemen, prompting protests and riots in Athens and other cities in Greece and Europe (boston.com 1). Violence tends to be viewed as ineffective in the modern world when other possibilities, such as compromise or reasoned (and ponderous) debate exist, but occasionally it can be a quick way to make a point of a magnitude that cannot often be matched by the simple expression of an idea through words. Not to advocate the use of force, but a picture (or an action) that can inspire such a significant range of emotion is worth thinking about, no matter what the content.
Perhaps the most impressive image to come out of the riots in 2008 shows four people: a protestor in the foreground on the left, dressed in a leather jacket, wearing a beanie and gloves, and holding a flaming Molotov cocktail in his right hand. Another protestor in the middle ground appears to have just thrown a similar device, and is dressed comparably to the first protestor: in all black. Both protestors face away from the camera towards two riot police officers who are farther away in the background. One of the officers is engulfed in flames from the Molotov cocktail just thrown by the protestor in the middle ground, and another officer on the right side of the picture looks on, likely about
to help his flaming compatriot. A part of a series of pictures, the image will undoubtedly garner a divided response. The picture supports the cause of the protestors: it shows a riot officer on fire, but there is the impression that the photographer is simply recording important events in his/her time. The most striking part of this photo other than the action displayed is the environment in which it takes place: an average street, one of which variations exist in many cities. There are some trees and other plants on the left, with buildings dominating the distant background. This picture is rife with symbols to elicit more of a response, but that advantage can also be a bane as it serves to divide rather than unify it's audience.
The photograph argues two seemingly contradictory points, which is likely why it is such an emotional appeal (and so likely to divide people in their opinions of it). This visual text uses pathos and symbolism to make it's argument. The Molotov cocktail has represented revolution, rebellion, and the fight for freedom against oppression (or at least the struggle of the underdog against impossible odds) since it's christening nearly 100 years ago, and the men dressed in black and throwing incendiary devices at police officers – symbols of authority rarely resolve more clearly than in the police force – inspire either thoughts of revolution, injustice, and anger or simply fear, especially considering the political environment in which we live where those who are viewed as freedom fighters in other countries are portrayed in the United States as terrorists. It is easy to give into fear, and the argument of the picture is marginalized by the obsession with fear in our culture.
The argument is most effective when the viewer is of the expected audience: younger people, with education or without, who feel dissatisfaction with their government, and those who feel mistreated by the authorities. Though the photo can be shocking, the context of the picture is very important to remember: these men aren't sadistic criminals trying to inflict pain, they are merely citizens attempting to take revenge and make their voices heard for what they perceive to be an abuse of power by the police. The photo leaves it up to the viewer to decide whether the actions of these anonymous men is something to be respected, feared, or even hated. Such a polarizing photo will
certainly have those who are offended by it: those who believe violence is never justified, those who question the motives of the rioters, those who feel the police are just doing their jobs, and those who would jump at the chance to term the masked men as terrorists. 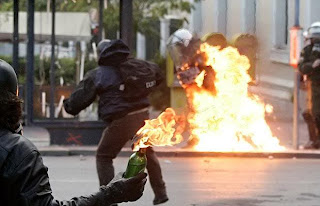 Just wrote a 3-page in class essay, so I'm sorry that I can't really post anything of consequence. Not 'cause I don't want to, more just that my brain sort of ... is written out right now. So instead I'll just post about how dumb Jersey Shore is.

Here, have a shamelessly stolen picture:

So honestly, this show just represents to me how stupid the United States populace at large is. Seriously, this show isn't even close to anything resembling real events, and it's simply terribly written drama. On the three occasions I've watched it, my impression is that MTV is trying to influence the values of their viewers. Not that I can really dictate what other's views should be, but these are some lame-ass values being expressed in this show.
What about you guys? Jersey Shore good or bad?
Posted by TheDude748 at 3:51 PM 23 comments:

So it turns out that not only did Apple change the font for the Note app in the recent iPhone update, but apparently they also made my music on my iPhone inaccessible. I'm currently re-uploading my songs onto my device, and hoping that this will remedy the problem. To be honest, I didn't lose anything but time, so one might think it unnecessary to complain, but seriously, why does an update, supposed to make my product either, a) better, or b) less buggy, disable one of the major features of my device? If there were a similar product out there, Apple would totally lose my business. It's a good thing they know what they're doing I suppose.

tl;dr: I bitch about Apple some more.

PS, this song is awesome:

Recently, Apple changed the font used on the iPhone Note application, and I don't like it. It used to be a very practical and readable font, but now it looks like one of those "fun" fonts. Now this is completely unimportant, but I do use the Note function on a daily basis and the change seems completely unnecessary. Now a useful addition in the update would've been the option to change the font, but instead they simply arbitrarily changed the font. Like seriously Apple...double you tee eff mate?
Posted by TheDude748 at 12:16 PM 18 comments: 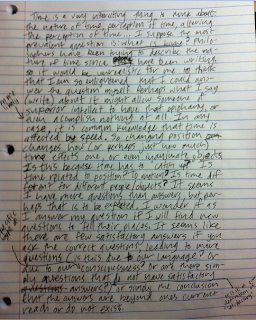 Here's some stuff I wrote about time. It's not enlightening, just something I wrote to try and be less bored in class XD
Posted by TheDude748 at 11:44 PM 11 comments:

Rooster Teeth
Of course the legendary Rooster Teeth had to be on this list. They are most famous for their machinima series Red vs Blue, and are some of the pioneers of the machinima community. This is just their YouTube channel, but they post all the videos that they post on their site here as well. If you haven't seen Red vs Blue, you MUST check this out. And if you haven't, they have many more videos that you may not have seen from them.
Smooth Few Films
Some more machinima creators, responsible for the CS:S machinima series Leet World. More recently they made a live action series called Web Zeroes. Both of these series are worth checking out, although Leet World definitely got stale near the end. I've only watched a few Web Zeroes episodes, but they were certainly funny and worth a look. As of right now, they are not making any new content.
Posted by TheDude748 at 5:20 PM 33 comments: